skip to main | skip to sidebar

So the iPhone died suddenly and there's nothing backed up or recoverable. The software just froze with the apple on it after a restart. The geniuses at the apple store couldn't figure it out. the phone rings and makes the text message sound, but the screen is frozen. The home button doesn't work, so a hard restart is not happening. Some company apple sent me to wants $800 - $2000 to attempt data recovery. Right.

So now I am torn between Android and Apple. The S9 is supposed to be good right now. A chinese phone is possibly better, but the big phone companies won't touch it because of rumors of the chinese government spying on phone users. Part of the lies our government is telling us these days or just another country/corporation spying on us? Like Facebook, for instance. Collecting and selling personal information is a trillion dollar business.

Then there's the iPhone. So many flaws, yet still, the hype sells.

Not being able to open it and do a battery reset is one of the deal breakers. A bigger deal breaker is not being able to back up the phone without the internet. But I am so used to it after two years, or is it three. Samsung's bloat is a deal breaker, but the phone is so much better that the iPhone on so many levels, including price, size, screen resolution, cameras, contacts, and the list goes on.

Once I click passed the unwanted advertising, we get to strike two. More advertising. Right on the MSN page they force on me, the top stories are click-bait for the kind of sites I try my best to avoid. Sites that download so much crap that they slow the computer. For these two reasons alone I am done with trying to enjoy Windows 10 and yet, I am stuck with it for now so I will spend time trying to figure out how to change the defaults so my computer can be my computer again.

Ok, so I seem to have maybe figured out how to stop the Office advertisements from appearing. We shall see the next time I restart. In System-Notifications & actions, I clocked "OFF" for Office notifications. Since I seldom use Office right now, why should I be notified about anything about a product I seldom use, right?

My initial experience with Edge, the replacement web browser for Internet Explorer, was similar though it may be faster and cleaner than Chrome or Firefox. That may be wishful thinking, however, as I have not used it to log into anything anywhere nor have I browser the web with it.

So I found the way to turn off auto-restart for Windows 10 auto-updates. Unfortunately, I found that out too late and lost writings and other stuff I was doing because I fell asleep without saving all of the files I was working in. User friendly my ass. Any OS that automatically closes any files without the user's permission is not only not user friendly, it's user disrespectful, user undermining, and user not-for-me. Microsoft, you did it again. You turned me off using your products or trusting your company.

I am also noticing Windows 10 and iphones are not compatible.

Sucks to be stuck in Windows.

Posted by candoor at 7:14 PM No comments:

A friend gave me an iPhone 5s when my HTC Inspire finally bit the dust. This 5s is my first iPhone and therefore my first chance to compare the two operating systems so this entry is intended to be a loose list of differences, pluses, and minuses I find as I explore the iPhone and either cheer something I could not do before or mourn the loss of something I took for granted. There's no science, testing, or formal comparison in this entry. Just ramblings of a user switching from Android to iPhone.

There are people who swear by Apple products and would not touch a Microsoft (Windows) or Google (Android) product if their life depended on it (well, maybe if their life depended on it, but they'd have serious doubts it would save them). There are people who never touched an Apple product simply because the opportunity never arose. I fall in the later category. I recently was gifted an iPhone 5s by a dear person (son of a friend) when my Android finally became too problematic after six years of reliable dedicated frequent use. I knew how to do everything I needed to do on my old Android and though it had limited memory and poor battery, I adjusted because it did what I wanted it to do.

Now I am learning the iPhone features and so far, the only one jumping out is the talk to text feature because that did not work all the time with my Android (it would not work when I was connected to WiFi for some reason... it was a cutting dge phone ahead of it's time six years ago, but definitely limited by 1Gb memory). Still, I miss the ease of use that came with familiarity. Not faulting the iPhone (yet) as I hope to learn to do most of what I did and am a little excited about learning new tricks my old Android could not do.

To this end (whatever end this may be), I am going to keep two lists in this blog entry. On the left will be the new things I can do that inspire my smile. On the right will be the missing and the flaws, things I used to be able to do that I no longer can do. Hopefully none will be deal breakers for the iPhone for me, but that is why I am keeping track. Part of me already wants to move back to Android. This list will help me see the benefits of the iPhone and let me measure them against the losses.

I think I will start each feature or flaw in the iPhone 5s simply because it is the phone I use at the moment. The Android had many flaws, though some may have been the age as it was at least four years old. Unfair, I know, but whoever said life was fair? :)

Flaws in the iPhone 5s

Serious flaw - No ability to save a draft text message. With Android I was used to tying out a text message anytime and saving it in draft for a more appropriate time for sending (like a late night text I would rather send in the morning or a text I'd rather send when someone got off work). In fact there was the ability to send a text on delay. No such feature in the iPhone.

Possible Dealbreaker - The inability to save a draft text is bad enough, but the suggestion I read online was to type out the text then close the phone. The trouble is, if another text message comes in, the temporarily saved message is gone. That is the first potential dealbreaker I've found in the iPhone 5s. I researched online and found Apple has no phone that saves draft text messages, so while the decision not carved in stone, I may go back to Android when I replace this phone.

to be continued (if I remember)... 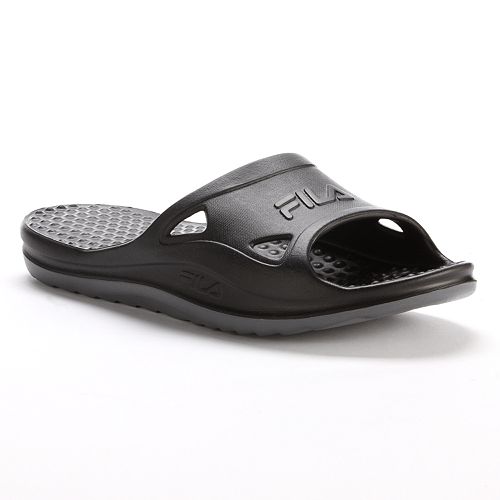 PRO: The best thing about these Fila Slide Sandals is the material. It is comfortazble and the material shrinks with heat to mold to your individual foot. I have several pairs and love them for the fit (especially after they are broken in), convenience of a slip on, and the price ($14.95 at Kohls). The footbed is textured and padded in three layers to add to comfort and grip. It is made of EVA so it is completely waterproof, great for any weather, showers, and pool wear. CON: These sandals will seem stiff at first, but the mold well. The worst thing about these sandals is they shrink, so they usually run small and you might find big differences in the same size even when new, even within pairs. I would not buy them without trying on both in the box. If you leave them in the sun or in the car in 90+ degree heat, they will shrink a couple of sizes. If you have kids that might not be too bad, but unless you know someone with smaller feet who will wear your shrunken sandals, don't leave them in the sun or hot places. If you live in a hot climate, they will eventually shrink and need to be replaced or handed down to a smaller foot. I will definitely buy these again and keep a couple of pair of these around.
Posted by candoor at 6:07 PM No comments:

PRO: Very low cost, about a nickle a piece. Very lightweight. CON: They are small and thin, as advertised (the box says 20% thinner, 5x drier, though those claims always lead me to ask than what? as exactly what the product is being compared to is missing from the comparison). Heavy perspiration will soak them. The box does not reseal or reclose well and they are not invididually wrapped, nor are they in an airtight wrapper within the box, so the sanitary and dryness aspect comes into question and you must package them in your own plastic bag for storage and travel, especially after the box of 50 is opened. They have no wrapper for disposal. They will protect clothing, but only for a very short while.
Posted by candoor at 6:13 PM No comments:

I found a very odd name for a site comparing itself to medical marijuana and relaxation. From my perspective, it makes no sense to emphasize the law and substance abuse if you are trying to offer an alternative calming peaceful therapuetic experience to people. THis is one person's opinion of sound therapy, but the first five minutes felt like a reasonably calming sleep machine, but the wind down after five minutes felt like a let down, a slow fall, and then the lower tones after that felt like sitting in traffic on the highway culminating in an annoying alarm clock buzz in the last thirty seconds. Just because they call it marijuana does not mean it is...
Posted by candoor at 9:27 AM No comments:

A great local find for Orlando, The Wild Rice Asian Buffet at 843 Lee Rd. Orlando, FL 32810 has an excellent price to product ratio. Staff are friendly and attentive. The place is clean. A wide selection of Asian and American hot and cold foods is served on eight serving tables with a dozen dishes on each. There is a separate counter for choose-your-own-ingredients for hibachi, another for choose-your-own-ingredients for asian noodle soup, a not so impressive sushi counter, and a couple of cold dessert tables that include a soft ice cream machine and a hard ice cream freezer. All that for under $10 including a soft drink and tax for lunch. Just over $12 for dinner ($1 more fri/sat nights, $3.99 per pound more for steamed crab at dinner). Very fair discounts for children. Overall, excellent prices for the selection, the quality is above average, and the cleanliness is well above average. I found this place yesterday just cruising for an inexpensive lunch and I returned with five friends today and they liked the place too, so yay, two days in a row of yummy asian buffet that definitely reminded me how much i love buffets, especially asian buffets... yes, i like them enough to link them like this...

hope you had something yummy today too :)
Posted by candoor at 1:05 PM 2 comments:

Followers (I dare you)